A couple of months ago, at 2am in a stuffy apartment in Yangon – I was busy taping plastic bags to my mattress and spraying horribly toxic bug spray all over the bed frame. A bit of a weird situation (granted, I had had a healthy number of beers by this point) but we had a bed bug infestation. My flatmates and I were covered in a rash of intensely itchy bites, making us weep with frustration and desperate for a solution.

A bit of intensive late-night research revealed that not only can these creatures basically survive a nuclear apocalypse, but they are also most commonly found in the houses of ‘transient foreign migrants’. Wonderfully accurate. The apartment belonged to one INGO’s international emergency response team – people came and went through 1 week to 6 month periods. We chose to self-describe as ‘expats’ but the (more pejorative?) category ‘transient foreign migrants’ seems more accurate and the bed bugs certainly weren’t going to differentiate.

The political economy of aid, and the way that we elect to describe and conceptualise our own place within this huge, heaving industry is pretty interesting. It is a strange, even perverse, situation which sees Western countries export crowds of over-educated, middle class, eager young people to some of the most gruesome and appalling places in the world. I count myself as one. Places that most sane – and local – people are desperately trying to flee. It’s the nature of the beast, but deserving of reflection. We (the foreigners) are expats because we carry artisan coffee in our suitcases and can afford to pay $10 for a trip to that air-conditioned gym; but we are, nonetheless, migrants who rely on a constructed, parallel economy to the one in which we work.

An economic migrant is a migrant of necessity, not choice. However, comparing the ailing job markets back home with the ripe, prolific lists on Relief Web’s jobpage does give pause for thought. As the recession bites, it is now completely normal for young graduates to face months of bleak unemployment and welfare support, casting CVs down a black hole until something (anything?) materialises. But once in the NGO sector it is extremely rare to hear of someone unemployed for more than a few months.

At a time when economic migrants are being maligned across Europe (with a good amount of hysteria about the ‘deluge’ of Romanians and Bulgarians forecast to descend upon Britain’s shores– not racist, you understand, just concerned that there will be enough fruit picking/toilet cleaning/manual labour jobs for eager Britons), there is a distinct myopia when it comes to seeing our own economic choices. Working in aid is easily cast in a moral frame, but is also governed by pragmatic decisions (starting a family? UN salary suddenly preferable to MSF’s stipend). I have just moved to Burma as a freelancer, confident(ish) that my professional experience, contacts and contextual knowledge will eventually furnish interesting, paid work. It is a calculated risk, but one dependent on a very healthy NGO market and economy – in one of the poorest countries in Southeast Asia, ranked 149 on the Human Development Index 2012 and featuring several long-standing and brutal civil conflicts.

I am hesitatant to cast an ethical spin on all this – it is simply a reality of political (and geographic?) economics, but a collection of issues that does seem to toe a fine line between bizarre and inequitable. A starting anecdote for a different blog perhaps, but relevant considering the previous post on ‘capacity building’: two colleagues, one from Goma, DRC and another from Sierra Leone, both highly experienced, capable individuals working at senior management level – described on separate occasions the frustrating necessity for them to work outside their own countries, in order to ensure they could get a job and salary relevant to their experience, as an ‘expat’. Which just seems downright barmy, given the need for educated, able local people to help develop and invest in their own country, especially in places like Goma.

I’m sure everyone has examples such as these, and I don’t pretend to have a solution, because weighting international/national salaries to reduce distortion of local economies makes sense. But sometimes I do feel a bit as if I’ve eaten the slice of cake, sat down at the Mad Hatter’s tea party and expected to humbly accept this global economic merry-go-round of absurdities without question. 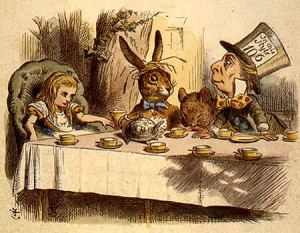