This is the third in our series on DFID’s monitoring systems. Click here to read our previous blog, which discussed our analysis of over 600 Annual Reviews from DFID.

I’ve previously mocked DFID’s Annual Reviews on this blog. In the spirit of constructive criticism that (on a good day) pervades Aid Leap, it’s now time to say something more detailed about why they don’t work, and how they might work better. 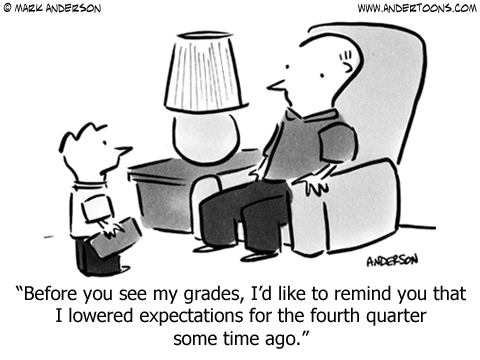 Annual Reviews are DFID’s primary way of monitoring a programme. They generate huge amounts of paperwork – with an estimated twenty million words available online – alongside a score ranging from ‘C’ to ‘A++’, with a median of ‘A’. If a programme receives two Bs or a single C, it will be put under special measures. If no improvement is found, it can be shut down.

This score is based on the programme progress against the logical framework, which defines outputs for the programme to deliver. Each of these outputs is assessed through pre-defined indicators and targets. If the programme exceeds targets, it is given an A+ or an A++. If it meets them, it gets an A, and if it falls short, it gets a B or C.

It’s a nice idea. The problem is that output level targets are typically set by the implementer during the course of the programme. This means that target-setting quickly becomes a game. Unwary implementers who set ambitious targets will soon find themselves punished at the Annual Review. The canny implementer will try to set targets at the lowest possible level that DFID will accept. Over-cynical, perhaps; but this single score can make or break a career (and in some cases, trigger payment to an implementer), so there is every incentive to be careful about it.

A low Annual Review score, consequently, is ambiguous. It could mean that the implementer was bad at setting targets, or insufficiently aware of the game they are playing. Maybe a consultant during the inception phase set unrealistic targets, confident in the knowledge that they would not be staying on to meet them. Maybe external circumstances changed and rendered the initially plausible targets unrealistic. Or maybe the programme design changed, and so the initial targets were irrelevant. Of course, the programme might also have been badly implemented.

Moreover, the score reflects only outputs – not outcomes. A typical review has just a single page dedicated to outcomes, and fifteen to twenty pages describing progress against outputs. It makes no sense to incentivise the implementer to focus on outputs at the expense of outcomes by including only the former in the scope of the annual review. The best logframes that I’ve seen implicitly recognise this problem by putting outcomes at the output level– but this then means that the implementers have even more incentive to set these targets at the lowest possible level.

I don’t want to throw any babies out with the bathwater. I think the basic idea of a (reasonably) independent annual review is great, and scoring is a necessary evil to ensure that reviews get taken seriously by implementers. As I’ve previously argued, DFID deserve recognition for the transparency of the process. I suggest the following improvements to make them a more useful tool: